Woman Who Urged Friend to Kill Himself Is Guilty of Manslaughter 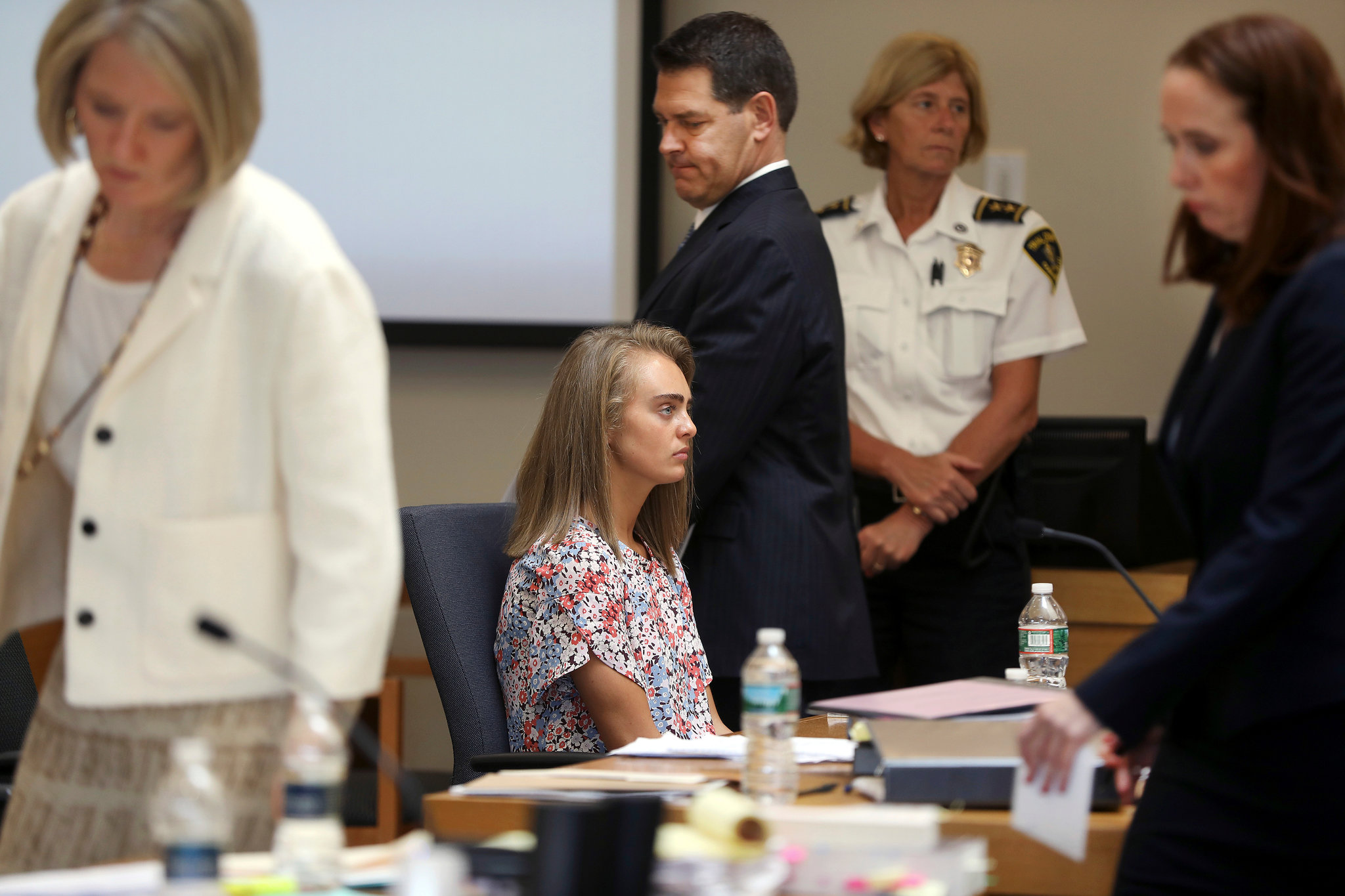 TAUNTON, Mass. — A young woman who sent a barrage of text messages to another teenager urging him to kill himself was found guilty Friday of involuntary manslaughter in a case that many legal experts had expected to result in an acquittal.

The verdict, handed down by a judge in a nonjury trial, was a rare legal finding that, essentially, a person’s words alone can directly cause someone else’s suicide.

The judge, Lawrence Moniz, of Bristol County Juvenile Court in southeastern Massachusetts, said the conduct of the woman, Michelle Carter, toward Conrad Roy III was not only immoral but illegal. Ms. Carter, who faces up to 20 years in prison, will be sentenced on Aug. 3.

Ms. Carter was 17 in July 2014 when she encouraged Mr. Roy, 18, whom she called her boyfriend, to kill himself. On July 12, while she was miles away, he drove alone to a Kmart parking lot and hooked up a water pump that emitted carbon monoxide into the cab of his truck. When he became sick from the fumes and stepped out, prosecutors said, Ms. Carter ordered him by phone to “get back in.” He was found dead the next day.

Knowing that Mr. Roy was in his truck and in a toxic environment, the judge said, Ms. Carter took no action.

“She admits in subsequent texts that she did nothing, she did not call the police or Mr. Roy’s family,” Judge Moniz said. “And finally, she did not issue a simple additional instruction: ‘Get out of the truck.’”

The verdict came as a surprise to many legal experts, because suicide is generally considered, legally, to result from a person’s free will.

Judge Moniz acknowledged that Mr. Roy had taken steps to cause his own death, like researching suicide methods, obtaining a generator and then the water pump with which he ultimately poisoned himself. Indeed, Judge Moniz said that Ms. Carter’s text messages pressuring him to kill himself had not, on their own, caused his death.

But then, Judge Moniz homed in on the cellphone calls between Ms. Carter and Mr. Roy while he was poisoning himself in his car. At the time, he said, Mr. Roy had fearfully climbed out of the car.

“He breaks that chain of self-causation by exiting the vehicle,” Judge Moniz said. “He takes himself out of that toxic environment that it has become.”

Judge Moniz pointed out that, during previous suicide attempts in 2012, Mr. Roy had second thoughts and reached out to friends and family for help. But, the judge said, Mr. Roy did not get help when he talked with Ms. Carter.

“She instructed Mr. Roy to get back into the truck, well knowing his ambiguities, his fears, his concerns,” Judge Moniz said. “This court finds that instructing Mr. Roy to get back in the truck constituted wanton and reckless conduct, by Ms. Carter creating a situation where there is a high degree of likelihood that substantial harm will result to Mr. Roy.”

As he finished, Judge Moniz asked Ms. Carter, who was sobbing, to stand. He then concluded: “This court, having reviewed the evidence, finds you guilty on the indictment with involuntary manslaughter.”

A spectator let out an audible “wow” as the judge pronounced her guilty.

In the courtroom’s front benches, the two families on either side of the aisle — Ms. Carter’s and Mr. Roy’s — were also sobbing. Mr. Roy’s mother, Lynn, left the courtroom with a tissue in hand and a tight smile, while Ms. Carter rocked ever so slightly back and forth at the defense table, her chin in her hands.

In a brief statement, Conrad Roy Jr., Mr. Roy’s father, thanked the prosecutors and said: “This has been a very tough time for our family and we’d like to process this verdict, that we’re happy with.”

As he left the courthouse, Ms. Carter’s defense lawyer, Joseph P. Cataldo, said that he was “disappointed” in the verdict and that the case was “pending,” indicating a possible appeal.

Relying heavily on voluminous online correspondence, the trial exposed the interior lives of two troubled teenagers, putting their thoughts, their secrets and their rock-bottom self-images on display. Judge Moniz said both of their families had been “immutably changed” by the case, and as arguments closed on Tuesday, Mr. Roy’s family and Ms. Carter herself were left in tears.

The judge’s decision surprised many legal experts, who had said that, despite the callousness of Ms. Carter’s conduct, the case presented a stiff challenge to prosecutors because Massachusetts, unlike dozens of other states, has no law against encouraging suicide.

Moreover, Ms. Carter was not at the scene. To secure a conviction of involuntary manslaughter, prosecutors needed to show that Ms. Carter’s words alone, typed in thousands of text messages to Mr. Roy, were reckless and essentially killed him.

Legal experts said the judge might have wanted to convey to Massachusetts lawmakers that they needed to pass laws to hold people accountable for their online conduct.

“This sends a strong message to people that using technology to bully people into committing suicide will not be tolerated,” said Daniel S. Medwed, a law professor at Northeastern University.

But Mr. Medwed said he was surprised at the guilty verdict, because the manslaughter charge seemed “a stretch” to begin with. Because Ms. Carter was not at the scene, and Mr. Roy ultimately acted alone, he said, it was difficult to prove she “caused” the death.

“We don’t see this every day,” said Laurie Levenson, a law professor at Loyola Law School in Los Angeles. She said that the decision by a single court in Massachusetts was unlikely to set a legal precedent, but that it could have a social effect.

“On the broader societal spectrum, I think it sends a message that behavior that we sometimes attribute to odd teenage behavior can actually be so extreme that it’s homicide,” she said.

“What used to be seen as just a tragedy,” she added, “is now going to be classified, perhaps, as a crime.”

The virtual nature of Ms. Carter’s role was not a barrier for the judge. And his verdict signaled that the law might need to catch up with cultural and behavioral changes wrought by technology.

A prosecutor made that very point in arguing that Ms. Carter’s physical absence from the suicide scene was immaterial.

In a trial that lasted a week, prosecutors used Ms. Carter’s text messages to paint a portrait of a needy, insecure teenager who pushed Mr. Roy to kill himself in an effort to gain attention. Defense lawyers used the same messages to depict Ms. Carter as a misguided teenager, addled by medication, who thought she was helping a deeply troubled friend.

Ms. Carter and Mr. Roy texted incessantly about their troubles: depression for him, an eating disorder for her, and profound social anxiety for both. When Mr. Roy told Ms. Carter in June 2014 that he was seriously considering suicide, she told him he had a lot to live for and urged him to seek help.

“I’m trying my best to dig you out,” Ms. Carter wrote.

By early July, she began to embrace the idea. “If this is the only way you think you’re gonna be happy, heaven will welcome you with open arms,” she wrote.

Ms. Carter said she would look like a “fool” if Mr. Roy did not kill himself. They talked at length about how he could kill himself with carbon monoxide. “If you emit 3200 ppm of it for five to ten mins you will die within a half hour,” she wrote. In the last days of his life, she told him repeatedly, “You just need to do it.”

With such texts projected onto large screens in the courtroom, there was no question that Ms. Carter had encouraged Mr. Roy to kill himself. The lawyers argued instead about motive.

Prosecutors said Ms. Carter had caused Mr. Roy’s death because she wanted the sympathy that would come to her as the “grieving girlfriend.” In a ploy to get attention from girls she admired, the prosecutors said, Ms. Carter erroneously told them that Mr. Roy was missing two days before he actually was. That Mr. Roy was still alive, they said, increased the pressure on Ms. Carter to make sure he would soon be dead.

“Every time he came up with an excuse not to do it, she kicked his feet out right from under him and told him why it didn’t matter, why he still needed to die,” an assistant district attorney, Katie Rayburn, said during Tuesday’s closing statements.

Ms. Carter’s lawyers cast her as a naïve teenager who wanted to help people. She began encouraging Mr. Roy to kill himself, they said, only after she became “involuntarily intoxicated” with antidepressants and was convinced he was determined to end his life.

Mr. Cataldo argued that Mr. Roy had a history of depression, had tried to kill himself before and had conducted hundreds of online searches for ways to die.

“She takes no physical steps. She doesn’t threaten him with serious bodily harm,” Mr. Cataldo told the judge in his closing argument. “Conrad Roy knows what he is doing, your honor. He made a choice to commit suicide.”

And yet, in the weeks after Mr. Roy’s death, Ms. Carter texted friends that she felt responsible: that she could have stopped him but did not. And she feared her texts would implicate her.

“Sam they read my messages with him I’m done,” she wrote to one friend. “His family will hate me and I can go to jail.”