Princess Haya: The princess, the sheikh and the £550m divorce settlement 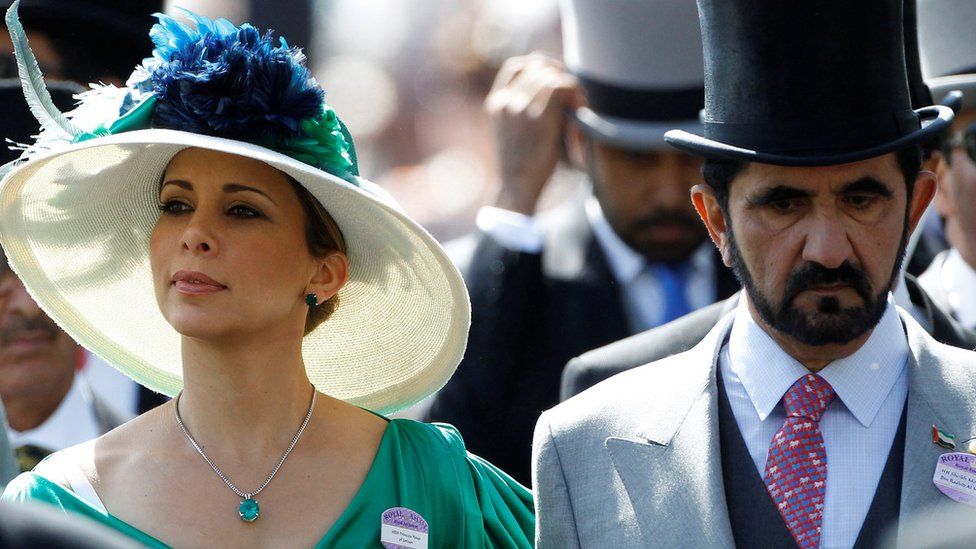 It’s described as the biggest divorce case in British legal history – a settlement of more than £500m involving the billionaire ruler of Dubai and his estranged wife.

She is the youngest of six wives of Sheikh Mohammed Bin Rashid Al-Maktoum – the multi-billionaire ruler of Dubai, prime minister of the UAE and influential horse-racing owner.

The judgment provides Princess Haya with sums to cover the cost of running two multi-million pound properties – one next to London’s Kensington Palace, as well as her main residence in Egham, Surrey.

There is also provision for a substantial “security budget” as well as holidays, salaries and accommodation for both a nurse and a nanny, armoured vehicles for the family, and the cost of maintaining various ponies and pets.

It has also awarded secured payments of £5.6m-a-year to each of her two children, a 14-year-old daughter and a nine-year old son. These are to be secured with a £290m guarantee.

‘In fear of her life’
This long-running court custody battle has thrown a spotlight on the normally closed world of Middle Eastern royal families.

Princess Haya fled from Dubai to Britain with her children in 2019, saying she was in fear of her life, after discovering Sheikh Mohammed had previously abducted two of his other daughters – Sheikha Latifa and Sheikha Shamsa – and rendered them back to Dubai against their will.

Sheikh Mohammed, 72, who is also a giant figure in the horse-racing world, has denied the abductions – despite a 2020 High Court judgement saying they were, in all probability, true. He published a poem called “You lived, You Died”, widely assumed to threaten the princess after discovering she was having an affair with her British ex-Army bodyguard.

Princess Haya continued to receive threats after moving to Britain, with messages saying “we can reach you anywhere” and she has since spent vast sums on security for fear her children would be abducted and flown back to Dubai.

The High Court ruled this year that Sheikh Mohammed had illegally hacked the mobile phones of Princess Haya, her bodyguards and her legal team, which includes the Tory peer Baroness Shackleton.

The hack was made using invasive spyware called Pegasus, which infects targeted phones and was produced by the Israeli firm NSO Group. Sheikh Mohammed said he had no hacked material in his possession and no surveillance had been undertaken with his express or implied authority. However, the president of the Family Division of the High Court in the UK found to the contrary.

In the divorce judgment, Mr Justice Moor, decided that, given earlier rulings, the princess and her two children were particularly vulnerable. He said they needed watertight security to ensure their continued safety in the UK. The main threat they faced was not from outside sources, he said, but from their father, a man who had access to the full weight of the state.

The court was told of a security assessment that put the risk to Princess Haya and her children as “severe”. The judge subsequently awarded funds to cover the running costs of armoured vehicles for transporting the family.

The High Court judge said he had done his best to reach a reasonable conclusion, given “the exceptional wealth and remarkable standard of living enjoyed by these children during the marriage”. He said that took the case “entirely out of the ordinary”.

Lawyers for Princess Haya insisted she had made no claims for her own future needs but she was criticised during court hearings for her lavish spending. Her son, for example, aged just nine, has been given three expensive cars as he was “accustomed to being given cars as gifts”. This was, said the judge, a legitimate criticism.

The judgment includes evidence provided by Princess Haya that she had been blackmailed by members of her security staff over an affair she had with one of them. She made several payments to four of these staff, some of which came from her children’s bank accounts. To correct this, she said she had sold jewellery to the value of over a £1m and had since had to sell more.

Sheikh Mohammed of Dubai has said heirlooms given to his former wife would be sent on to her. These included ballet shoes given to her by the world famous dancers Dame Margot Fonteyn and Rudolf Nureyev. He also said he has removed the online poem ascribed to him, which the princess perceived as a threat to her life.

He said he had no intention of causing harm to the princess.