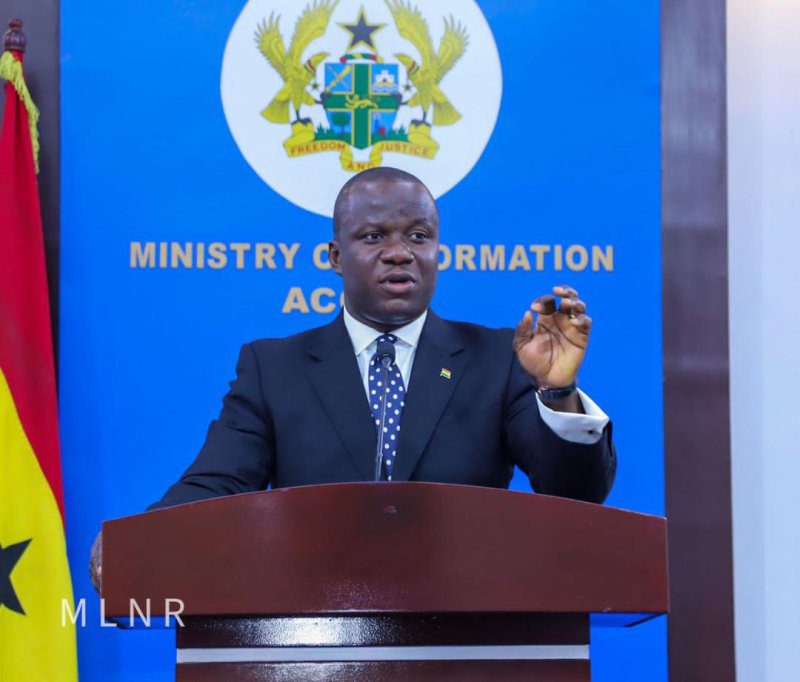 The Minister of Lands and Natural Resources, Mr. Samuel Abu Jinapor, has said that government has slashed the three percent withholding tax on unprocessed gold to 1.5 percent.

According to him, the previous rate encouraged smuggling, hence government’s decision to reduce it.

He said the tax would be collected at the point of production, specifically at the mining sites, starting from January 1, 2022.

Mr. Abu Jinapor, who said this at a media briefing in Accra on Tuesday, said the reduction of the withholding tax on gold showed the President’s intention of “indigenising” the whole mining framework to ensure that mining companies retain the full value chain of gold production.

The Minister stated that there was more to the mining sector than just ‘galamsey’, saying; “I’m happy that the developments achieved so far, have taken a holistic approach.”

He noted that the Ministry cannot solve all the problems the mining sector presented but it was on course to do better with the team of experts who are ” up to the task.”

The Minister, therefore, called on all Ghanaians to support the Ministry and the Minerals Commission to achieve more in the mining sector.

“We will call on Ghanaians to give us all the support for us to be able to handle the Mining sector, “he added

The Chief Executive Officer of the Minerals Commission, Mr. Martin Ayisi, on his part, outlined various policy reforms the Commission had taken, so far, to improve upon efficient service delivery.

He said among these policy initiatives are; abolition of paper-based applications effective November 1, 2021, digitisation of all official records of the Commission, online application for small-scale mining licenses of which 1,700 miners had already been registered.

He also mentioned that up to 11 new items had been added to the local content listing of procurement, surface mining operations on a large-scale are now to be fully taken over by Ghanaians, catering services, drilling services, and 20% of the financial services of mining are also to go through Ghanaian banks which would positively impact on the Ghanaian economy.

Mr. Ayisi believed that Ghanaians are now ready and had the capacity to undertake these duties on a large scale basis.

He, however, admitted that Ghanaians are not technologically ready for the underground mining on large scale but would require partnership with the large foreign mining firms to do so.

He said to ensure proper and effective monitoring of mining operations, the Commission would take delivery of 20 new Pick-up vehicles by the end of the year.

As a way of encouraging and strengthening officers for the task ahead, Mr. Ayisi said, the Commission is constructing new district and regional offices across the country, and also renovating laboratories to enhance their work.

Touching on Community Mining Scheme, the CEO of the Minerals Commission declared that an oversight committee would be inaugurated soon.

He added that 100 Mercury-free machines would be procured and given to small-scale miners to help stop the use of Mercury in processing gold.

Stating the timelines for delivery of these Mercury-free machines, he said, the first 20 of the machines would be available in the next two weeks and the rest by March, 2022.

Mr Ayisi also announced that the Reclamation Programme by government to restore the mined-out areas has started in Kumasi and would be continued in the Central and Western North regions next year.