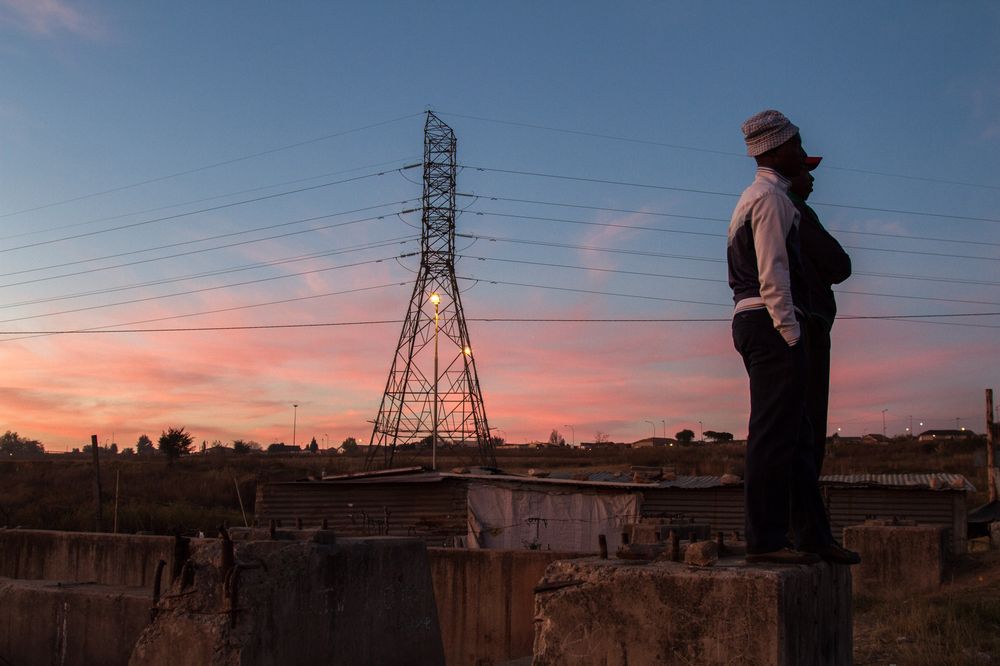 On a dry plain in Limpopo province in 2007, the leaders of South Africa’s monopoly utility broke ground for a huge new power plant. It was named Medupi for “rain that soaks parched lands” in Sepedi, a local language.

Jubilant officials proclaimed that the project would stimulate local growth and relieve the strained grid in a nation where almost 9 million people had no access to power. Then-Eskom Holdings SOC Ltd. Chief Executive Jacob Maroga said the station was the first of its kind since the 1980s.

More than a decade later, the facility is still years from completion and estimated costs have doubled to over $10 billion. On the site, massive metalwork and pipe segments await placement. A cooling rack resembling an industrial Parthenon runs alongside six towering boilers that will take an estimated 120,000 tons of structural steel to complete.

It’s a costly symbol of the disaster that is South Africa’s state-run electric utility. Eskom has 399 billion rand ($27 billion) in total debt, costing it $2 billion in interest payments last year. Moody’s Investors Service considers Eskom a key risk in deciding whether to downgrade South Africa, and Goldman Sachs Group has called it the single biggest risk to the country’s economy. Even the turnaround plan is behind schedule.

Fixing Eskom is arguably President Cyril Ramaphosa’s biggest challenge as he attempts to modernize South Africa, boost growth, provide jobs and overcome years of entrenched corruption. And shore up his support ahead of national elections next year. So important is Eskom that he mentioned it specifically in his first state-of-the-union address in February.

“Action we have taken at Eskom to strengthen governance, root out corruption and restore its financial position is just the beginning,” Ramaphosa said. “This is the year in which we will turn the tide of corruption in our public institutions.”

Eskom isn’t just a utility, it is South Africa’s biggest recipient of state loan guarantees. And its costs are out of control: The biggest union, the National Union of Mineworkers, has a contract requiring a wage increase of 23 percent over three years and a bonus, after protests and sabotage resulted in power cuts. Ramaphosa’s odds of changing that are weighted by the fact that he himself co-founded the union in 1982.

“Ultimately political constraints are going to prevent him from moving as rapidly as perhaps one would like,” said Daniel Silke, the director of Political Futures Consultancy in Cape Town. “The one thing that he doesn’t want to be accused of is overseeing job losses in the runup to an election.”

There are no good statistics about Eskom.

The utility has had 10 CEOs and six boards in the same period, and the new management has found around $1.5 billion in irregular expenditures, mostly involving procurement. “It’s not generating enough cash to cover both its operating costs and its cost of capital,” said Anton Eberhard, professor at the University of Cape Town’s Graduate School of Business, in an emailed response to questions. “Eskom’s losses will increase this year unless they conjure up an accounting trick, sell off some non-core assets.”

Ramaphosa has installed some experienced executives. Jabu Mabuza, chairman at Telkom SA, took the same role at Eskom, and Phakamani Hadebe, a former National Treasury official, became chief executive officer. Boston Consulting Group has been hired to develop long-term strategic plans for the company and Lazard Ltd. for financial advisory services. The utility is careful about describing the role of Lazard, given the sensitivity of potential asset sales, saying only that it will provide a report on options.

The new leaders have already put the utility’s mortgage business up for sale and in July they reported highlights of their governance cleanup: almost a dozen criminal cases opened. Most involve senior executives. The company has also concluded about half of 239 whistle-blowing complaints, and begun an investigation of all irregular supplier contracts—the kind of graft that helped put Eskom into its present situation.

But the big new direction is proving elusive. Management delayed until November a recovery program that had been due to be announced last month. In the backdrop is electricity demand that’s been sinking for years, dragging on revenue. To make matters worse, the South African economy entered its first recession since 2009 in the second quarter.

Eskom declined to reply to a list of questions ahead of the release of the corporate plan. A spokesman recommended reading the annual report.

A $2.5 billion loan from the Chinese Development Bank will bring the utility closer to fulfilling its funding needs for the year, while it still faces interest payments alone of 215 billion rand over the next five years. Ramaphosa recently assured lawmakers that the loan will not entitle the bank to ownership of the assets, but said its terms are confidential.

“There’s nothing in Eskom that gives Eskom hope,” Matshela Koko, acting CEO from 2016 through last year, said in an interview near his Johannesburg home. After working his way up for over 20 years, Koko resigned after being re-suspended for wrongdoing that he has denied. He was found not guilty on all charges in a disciplinary hearing in December and then Eskom served him with new charges.

The utility was a target in corruption scandals linked to ex-President Jacob Zuma and the influential Gupta family, which also involved international firms. U.S. consultancy McKinsey & Co. paid Eskom back about a billion rand in fees and interest it collected in an attempt to distance itself.

To make matters even more complicated, Eskom faces increasing competition from customers who generate their own power. And as part of an investment drive for South Africa, Ramaphosa has put back in motion renewable-energy generation run by independent producers with which Eskom signs contracts. Many unions oppose the projects out of fear that they will eliminate jobs associated with coal-powered stations.

The Medupi power station and a twin called Kusile, each to have capacity of about 4,800 megawatts, will ultimately cost more than 300 billion rand. The higher costs and delays were due to factors including labor unrest, contractor negligence and mismanagement. The World Bank, which lent $3.75 billion to Eskom for Medupi, rates the project’s implementation progress “unsatisfactory” and its overall risk “high.”

In Limpopo, poverty has worsened in recent years, despite Medupi swelling to a peak of 18,000 contract employees. About 7,000 jobs are expected to be phased out by January at the site, where steel piping big enough to drive through sits nearby the last boiler scheduled for completion—in 2020 at the earliest.